Following the 2009 military coup d’état that ousted former Honduran President Manuel Zelaya, there were major protests throughout the country both in favor of his forced exile and against it. While the legitimacy of Zelaya’s removal is still widely disputed, the brutal response against peaceful protesters by the government of interim-president Roberto Micheletti is well-documented. Local and international NGOs reported daily attacks and violations of fundamental rights directed against civilians protesting Zelaya’s “impeachment.” In many cases these assaults lead to deaths, injury, and the physical and psychological torture of protesters taken into custody. Physicians for Human Rights, along with three local NGOs, have analyzed 14 cases of such torture.

The conflict in Honduras that led to the June 28 coup d’état began when Zelaya announced his plans for a fourth ballot box, a referendum which would ask voters whether they supported convening a National Constituent Assembly to discuss amending the constitution. The vote would be held on November 29, coinciding with the forthcoming presidential, legislative, and municipal elections. President Zelaya did not announce that the effort to amend the constitution would specifically include altering Presidential term limits. Instead, he stated that he wanted to discuss the conditions of presidential reelection.

President Zelaya never otherwise outlined how he wanted to amend the constitution and only suggested that he wanted to modernize it. He also said that all reforms would be enacted after his presidency. The Honduran Supreme Court and military saw this as a socialist threat and an attempt to eliminate presidential term limits. Zelaya’s leftist views combined with his relationship with Venezuelan President Hugo Chaves perhaps contributed to this perception of a socialist threat. In response, on May 27 the legislative branch declared the fourth ballot box illegal. According to the decision, certain parts of the constitution, including presidential succession, could not legally be amended.

On June 28 President Zelaya was taken from his home by soldiers and brought to Costa Rica. The National Congress later accepted a letter of resignation from Zelaya, although Zelaya claimed he never wrote the letter. Speaker of Congress Roberto Micheletti was sworn in as temporary president. 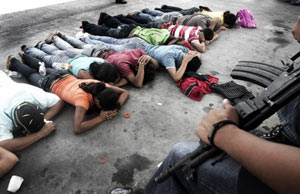 On September 26 Speaker Micheletti suspended constitutional freedoms such as the right to personal liberty, the right not to be held for more than 24 hours without cause, and the right to assembly. TV and radio stations that supported Zelaya were shut down. According to statistics released by the Center for the Prevention, Treatment and Rehabilitation of Victims of Torture (CPTRT), in the four months following the coup there was more than a 4,000 percent spike in human rights violations. The violations included torture, mass arrests, military force used against protesters, violence towards women, minority groups, and the media, sexual violence, and other cruel and degrading treatment. There is also widespread evidence from local Honduran human rights organizations that the majority of the cases have been ignored by the government institutions which examine and assess these victims. Human rights organizations doubt the impartiality of the government institutions as well.

These violations and lack of oversight prompted a local NGO, the Committee of Relatives of the Missing of Honduras (COFADEH), to contact Physicians for Human Rights and request support in the independent assessments of these victims of state torture and abuse. The coordination of the work was a joint effort with three local NGOs; the COFADEH, Center for the Prevention, Treatment and Rehabilitation of Victims of Torture and their families (CPTRT), and the Committee for the Defense of Human Rights in Honduras (CODEH).  With the aid of PHR consultant Dr. Alejandro Moreno, a Honduran court expert since March 2010, PHR successfully evaluated 14 of these claims.  The report compiled by Dr. Moreno has been used as evidence in some of the current court cases, which are being tracked by long-time PHR consultant Nery Osorio.