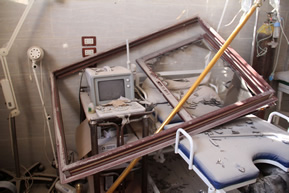 An ultrasound machine and a hospital bed are covered in rubble and debris following a reported air strike by Syrian government forces in the village of Al-Tahh, in the northwestern Idlib province. Photo: Omar Haj Kadour/AFP/Getty Images

Over the past week, Syrian government forces or their Russian allies have launched at least five aerial attacks on three of the main hospitals in Syria’s Idlib governorate, the most concentrated string of hospital attacks Physicians for Human Rights (PHR) has verified in Syria since April. The three facilities came under fire on the same day, September 19, and two of those hospitals came under separate attack just days later. PHR said today all five attacks likely constituted war crimes, either because they were targeted attacks on operating medical facilities or indiscriminate strikes in violation of international law.

“These are the most dramatic, sustained attacks on Syria’s health care system since the spring de-escalation agreement in Idlib went into effect,” said PHR’s Syria research associate Racha Mouawieh. “Based on interviews we conducted with hospital staff and eyewitnesses, we can confirm that these facilities, struggling to provide medical care as Idlib comes under daily assault, are being targeted themselves, an egregious violation of the laws of war and a callous attempt to inflict suffering on civilians who have endured relentless warfare for nearly seven years.”

Of the five attacks PHR has verified in the past week in Idlib governorate, three took place on the same day. On September 19, airstrikes pounded Kafr Nabl Surgical Hospital in Kafr Nabl, destroying an ambulance and damaging the facility’s emergency ward; al Rahman Children and Maternity Hospital in al Tah, where one hospital staffer was killed; and al Rahma hospital in Khan Sheikhoun, a facility built into a cave that was attacked in April following a chemical weapons strike in the same town.

”I was there at the hospital,” Hazem, a nurse at the al Rahma facility who asked we not use his last name, told PHR researchers. “We were very busy as we were treating the injured from strikes on the city, and there were two patients in the operating room. We continued working despite the airstrike, we did not leave until we had finished our work.” Three days later, in the early hours of September 22, the hospital again came under bombardment, causing structural damage and forcing the facility to close. The staff narrowly escaped with their lives.

“Health professionals across Syria are working in unfathomable conditions, putting their own lives on the line to save others,” said PHR’s program director, Dr. Homer Venters. “With repeated attacks from the air, they continue to provide emergency and medical care for people who have already endured colossal suffering. After months of relative calm, we’re now seeing a renewed aerial offensive against Syria’s medical facilities and personnel that will only increase suffering and death.”

Imagery of Kafr Nabl Surgical Hospital reviewed and verified by PHR, as well as testimony from eyewitnesses, confirmed extensive damage from the September 19 strike, which forced the hospital to temporarily suspend services. Early on the morning of September 26, that same facility was struck again by multiple airstrikes. One of the missiles directly hit the hospital, breaking through three floors and forcing the hospital to halt services indefinitely.

At al Rahman Children and Maternity Hospital, witnesses said three missiles struck near the hospital within an hour on September 19, hitting generators and fuel tanks and sparking a fire that tore through the facility’s eastern wing. One witness told PHR: “If the western section had been hit, it would have killed many more. But thank God it was not.”

“Those who provide needed medical care to the injured should not be sentenced to death,” said PHR’s Mouawieh. “It’s outrageous that these three facilities were hit nearly simultaneously. It shows the horrific practice of attacking health care in Syria continues to be a deliberate and illegal strategy of warfare in President Bashar al Assad’s arsenal.”

PHR has documented 478 attacks on 323 separate medical facilities in Syria since the conflict began in 2011, as well as the killing of 830 medical personnel.