A generation has grown up without knowing about the genocide in Rwanda. The killing fields there are now recorded in history books, and college students sometimes stare blankly when told that in the space of three months in 1994, almost a million people in this small east African country were slaughtered by their fellow citizens in a frenzy of politically-motivated mass killing. The fact that the world failed to stop this mass atrocity weighs heavily on the many of us who were active in human rights during that decade.

As the International Criminal Tribunal for Rwanda (ICTR) wraps up its dockets in Arusha, Tanzania on December 14 and hands over cases to other processes, we reflect on landmark “firsts” accomplished by the tribunal: the first international prosecution for the crime of genocide, and the first conviction for rape and sexual violence as forms of genocide.

For our team of forensic scientists at Physicians for Human Rights (PHR), providing physical evidence to the Rwanda tribunal also meant firsts: opening the largest single grave ever exhumed to date for forensic purposes; deploying experts from more than a dozen countries to conduct the investigation; and experiencing the pathos of watching exhumed bodies receive blessings in a church before laying them out for forensic evaluation on benches built for prayer.

There were hundreds of potential sites and graves to investigate in Rwanda, but the PHR team, under the leadership of senior forensic advisor Dr. William Haglund, was directed to a mass grave near the Roman Catholic Church and Home St. Jean in the parish of Kibuye, above Lake Kivu in the northwest of the country. The killings here were investigated in connection with the indictment of the parish’s former prefect, Clemont Kayishema, a trained medical doctor whom the tribunal would eventually sentence to life in prison for the crime of genocide. 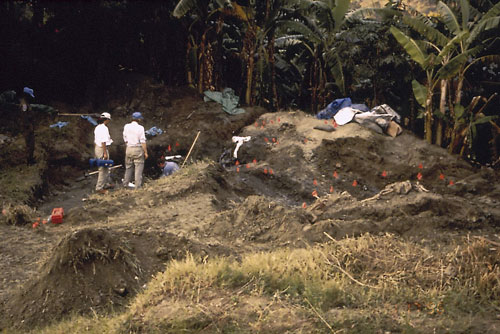 Dozens of mass graves were located near churches, because Tutsi villagers fleeing slaughter by Hutus often found sanctuary in churches and stadiums. The one examined by the PHR team had been dug by a resident who returned to the town after the killings: “With the aid of a Chinese bulldozer from a road-building project, and assisted by prisoners from the local prison, he had a grave dug behind the church and they pitched bodies into it for three days straight,” said Haglund.

PHR experts mapped the landscape, buildings, and rooms. They used forensic photography and meticulously documented and collected skeletons scattered over the landscape. Ultimately, the forensic team uncovered and examined the remains of more than 450 people. Many of the bodies were not yet skeletons; 70 percent were women and children. Nearly 140 were the bodies of children and infants. Members of the forensic team soberly referred to certain areas of the grave as “nurseries.” Unearthing the tiny bodies of babies swaddled onto their mothers’ backs was gut-wrenching to the team.

Pathologists and autopsy assistants arrived to determine the cause and manner of death. Even these medical doctors, accustomed to documenting death by violence, were overwhelmed by the proof of human cruelty before them. 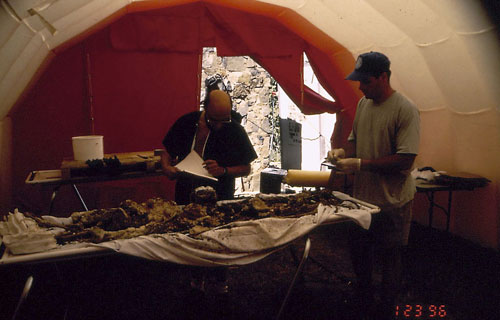 Pathologists work to determine cause and manner of death in autopsy tent at Kibuye grave.

The evidence for the tribunal was stark: machete wounds to the back of the neck, legs, and heels, and, most powerfully, the sheer percentage of women and children – who most certainly could not have been combatants, as claimed by the accused. With no available medical records of the victims, and lacking survivors for DNA collection, identification of the remains was not even contemplated.

All those who participated in this excruciating scientific undertaking in the service of justice came away changed. They knew they had participated in an historic project for forensic science and for the international rule of law. Most reported to us that their work on the Kibuye grave was a defining moment of their professional careers.

But they also left Rwanda with the burden of work left undone: the dozens of unexamined graves, and the inability of survivors to retrieve loved ones or bury their remains with dignity. Our experts were also sobered by the contrast between the scarce resources in Rwanda and the vast sums spent in their own countries on a single homicide investigation.

As the wheels of justice continued to grind at the ICTR, Rwanda also pursued its own methods of traditional justice and reconciliation, in attempts to patch together a nation ripped apart by demagoguery, ethnic animosities, and extreme violence. Sadly, impunity is still the norm in the Great Lakes region of Africa, as lawlessness, corruption, and mass atrocities continue to threaten Rwanda’s neighbors in Burundi and the Democratic Republic of the Congo, in particular.

During 21 years and 5,800 days of proceedings, the ICTR brought indictments against those most responsible for the Rwanda genocide: the tribunal indicted 93 individuals, arrested 83 of them and heard the testimonies of more than 3,000 witnesses. While imperfect, the court has set important precedents in the prosecution of war crimes, crimes against humanity, and genocide.

The International Criminal Court was created after the ICTR and the other ad hoc tribunals, with the purpose of addressing mass crimes globally. As that court in The Hague struggles to fulfill its overwhelming mission and justice eludes victims from Syria to Sri Lanka, we must hope that lessons learned from Rwanda can serve as an example of what can be done to deliver justice for mass crimes committed in Africa and around the world.