PHR’s team just returned from a training session in the DRC, where they are working with international and local partners to hold perpetrators accountable for using rape as a weapon of war. This is the first in a series. Learn more about the project.

This past October, PHR’s Deputy Director Susannah Sirkin and I had the opportunity to sit in on an appeals hearing in Kalehe, a small village in South Kivu, in the Democratic Republic of the Congo (DRC) for a case concerning abduction, mass rape, sexual enslavement, and murder.

On the day we visited, the accused—two young men dressed in short-sleeved yellow jump-suits—stood blankly facing the front of a modest, one room brick building, clasping their hands behind their backs as two Congolese military officers flanked them on either side. The accused were alleged to have been members of the FDLR militia (the Hutu-dominated “Democratic Forces for the Liberation of Rwanda”) involved in the abduction and sexual enslavement of hundreds of women.

Just outside, in a dusty yard in back of the building, 19 women survivors—some sitting on a flat stone wall and some squatting on the ground with their small children—waited. These women had traveled a long way from their villages, where many of them had been stigmatized by the sexual violation, and rejected by their families and communities. Despite all that these women had been through already, they bravely came to face the accused and to claim their day in court.

The building was serving as a “mobile court” sponsored by the American Bar Association’s Rule of Law Initiative, Avocats Sans Frontières (Lawyers without Borders), the UN Development Program and the Congolese government. For two weeks, the judges would hear cases of mass atrocity in the war-ravaged eastern part of the county.

Even in the most straightforward contexts, justice is difficult to define and ephemeral. But for these courageous women in Kalehe—what is justice really? The women we met at Kalehe are not likely to obtain much, if anything, by way of compensation. But their presence at court that day—to tell their story and face the accused—was a powerful, humbling demonstration that the judicial process has some reparative value. The presence of these women at the little rural courthouse offered profound hope amidst the despair.

On January 26 to 28, we convened our first forensic training workshop in DRC with these stakeholders. Our shared goal is to improve methods for the forensic collection, documentation, and preservation of evidence so that more cases of sexual violence succeed in court. And through these workshops, we are hoping to facilitate a network for informal communication among professionals on the ground to help bolster the medical and legal process of documenting and prosecuting these crimes.

We are privileged to be working with a wonderfully committed group of individuals and organizations in Kenya and eastern DRC, and over the next few years, we hope to work with similar stakeholders in South Sudan, Uganda, and Central African Republic as well.

The journey toward justice is long but with courage, strength, and persistence, together we will bend the proverbial arc in the right direction. 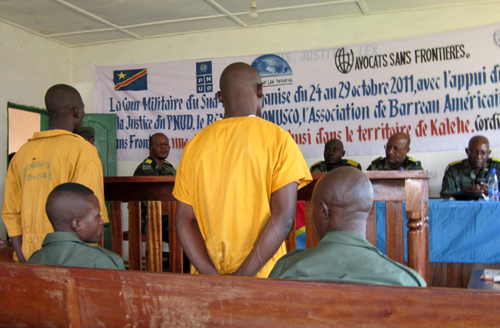 Accused rapists face the judges in a DRC tribunal. October 2011. 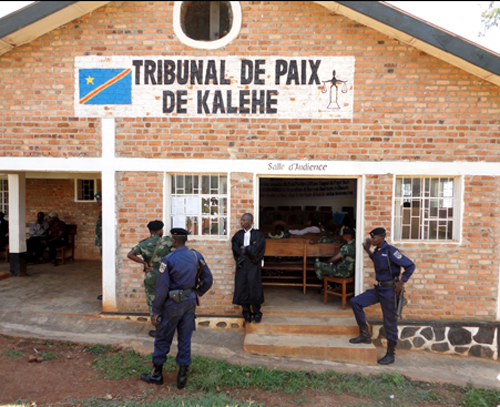