PHR’s team just returned from a training session in the DRC, where they are working with international and local partners to hold perpetrators accountable for using rape as a weapon of war. This is one of a series. Learn more about the project.

Six young Congolese women burst through the doorway of our lodging in Panzi, South Kivu, where the PHR team is staying for several days as we train police, lawyers, judges, doctors, and nurses in effective evidence and documentation of sexual violence. They encircle us with clapping, cheering, singing, tight hugs, and huge smiles, saying “welcome, welcome.”

It turns out we’re the first guests to stay at the brand new and modest guest house on the campus of the City of Joy, a project of Eve Ensler’s V-Day, a global movement to end violence against women.

(The “City” aims to build legions of leaders from among the vast number of survivors of horrific sexual violence from Congo’s wars and post-conflict environment.)

Each evening, as we return to our guest house after a long day of intensive work with our local colleagues, the girls and women greet us, often waiting for our return at the doorstep.

One wants to be a doctor. She’s 18 and her parents were killed by the rebels. She has no funds for school, but she tells us, “I want to help others recover.” Another says she’s going back to her village to find the other girls who were raped and are afraid to tell anyone.

“They are all alone with their suffering,” says Mama Kyala, our host,  “and I will be there to support them and raise awareness.” She has a soft smile and a calm confidence. She sits with us well into the night over tea and biscuits. A social worker, she received the first rape survivor at Panzi Hospital when it opened 12 years ago.

Mama Kyala told us the story of another girl, now 19, who was forced into marriage at 16, became pregnant, and developed a fistula after giving birth. Her injury was so severe that she spent three years recovering at Panzi Hospital. The girl, now a confident young woman, came into the room to kiss Mama Kyala goodnight.

Mama Kyala indicated that so many of the survivors she has helped over the years at Panzi have nothing to return to when they leave the hospital. She is the “Mama” of dozens of girls and women who will soon return to the villages where they were cruelly violated. Mama Kyala told us “I used to cry every night, listening to their stories, but watching them recover, I know I just need to remain strong for them.”

For PHR, these intimate conversations by candlelight reinforce our conviction that justice doesn’t stop when the perpetrators are caught and convicted, important as that is, but when the victims receive reparation and become survivors. 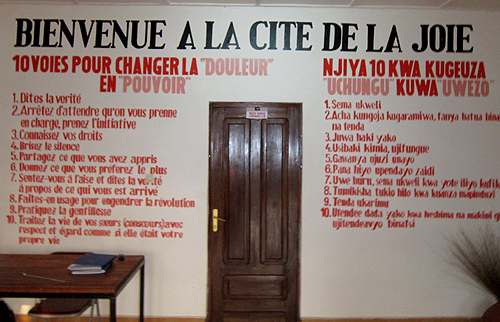 Everyone can be clear on what the rules are while at the City of Joy. Photo: Susannah Sirkin, PHR.