Skip to content
PHR documented the wounds of this Rohingya man at Balukhali refugee camp in Bangladesh. He was shot from behind by the Myanmar military while fleeing his village. Photo: Salahuddin Ahmed for Physicians for Human Rights

I’ve never met so many survivors of gunshots in a single place before. They’re not hard to find in the refugee camps in Bangladesh, which shelter nearly 650,000 Rohingyas who have fled Myanmar since the government there instituted a ruthless campaign of violence against them. Military leaders in Myanmar falsely claim they have mounted this brutal attack on civilians, many of them children, because they are “terrorists.” They have even stated that Rohingyas have set their own homes on fire.

The forensic evidence in these cases tells a vastly different story — the truth.

I traveled this month to Bangladesh with a team of doctors from Physicians for Human Rights to document the evidence and listen to survivors’ horrific accounts of physical and sexual violence. 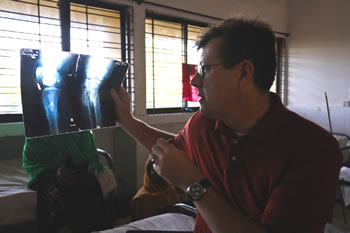 PHR’s Dr. Homer Venters examines an X-ray of a Rohingya man who was shot from behind by the Myanmar military. The X-ray shows a bullet lodged in the knee. Photo: Salahuddin Ahmed for Physicians for Human Rights

One survivor, Tamir*, told me he was shot while fleeing his village. Like many, Tamir reported that his village in Rakhine state in Myanmar came under a coordinated attack by soldiers and civilian militias, who entered the village, opened fire on houses with rifles and rocket-propelled grenades, and set the homes aflame. As Tamir ran from his home, he reported, he was shot from behind. When I saw him in the hospital, physical examination of his leg revealed a bullet entry wound on the back of his lower leg, and I was able to feel the bullet still lodged in the front of his knee. Tamir’s x-ray revealed that both bones in his lower leg had been completely shattered and, despite surgery, he will likely never walk again without assistance. The medical evidence is highly consistent with Tamir’s account of events.

Another survivor, Amirah*, a young woman from a different village, recounted the horror of her entire community being attacked in their homes, and then being driven toward a second group of soldiers at a river bank. There, hundreds of women were separated from the men and boys and taken back to the homes in the village, where they were raped by both soldiers and civilian militias before being cut down with machetes. Then their homes were set on fire. The villagers who remained at the river were mowed down with rifle fire as they fled into the water. Amirah said that once she and other women were taken to the houses, she was struck on the head with a machete and knocked unconscious. Left for dead, she awoke to the pain and smell of her body on fire. She crawled out to escape the fire and made her way toward Bangladesh. Physical examination of Amirah revealed healing third degree burns on her hands and feet as well as a large healing laceration on her scalp, all highly consistent with her account of events. 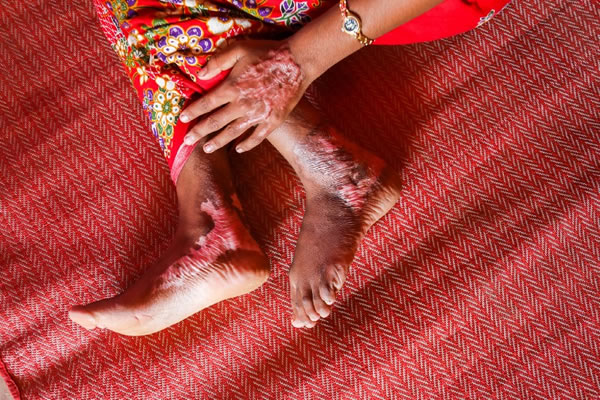 A Rohingya woman at a refugee camp outside of Cox’s Bazar incurred serious burns following a Myanmar government attack on her village. Photo: Salahuddin Ahmed for Physicians for Human Rights

The violence inflicted on Tamir, Amirah, and the many other Rohingya refugees we have spoken with, is criminal. And yet the military leaders who ordered it and the soldiers who carried it out are unlikely to ever face justice within Myanmar: Experience shows that if criminal investigations happen at all, they will be inadequate and evidence will be shoddy and scarce. This is particularly alarming, because history has also taught us that internal conflicts are unlikely to come to an end without some form of accountability for atrocities committed — especially if the atrocities are ethnically charged.

The need for justice and accountability was painfully clear to us in Cox’s Bazar. The survivors we spoke with deserve justice, and so do all the other victims of this coordinated campaign of violence. Justice and accountability was also the focus of the recommendations made by the United Nations’ highest human rights official, Zeid Ra’ad al-Hussein, when he asked UN member states earlier this month to authorize investigations into the crimes committed against the Rohingyas in Myanmar. The evidence I gathered this month with my colleagues will be crucial to such investigations, which is why we take such care to forensically document and preserve our findings.

But in the more immediate future, urgent action is needed to ensure the safety, security, and health of Rohingya refugees. In an agreement negotiated behind closed doors in November, the Bangladeshi government agreed to send the Rohingyas back to Myanmar over the next two months. International law requires any return of refugees to be voluntary, and prohibits the return of anyone to potential violence or persecution. Nothing I saw or heard in the refugee camps indicates that the Rohingyas are safe in Myanmar, and few people I have spoken to would go back voluntarily.

This is also a form of accountability: believing the survivors of unspeakable violence when they say they cannot safely go home. Justice must start now.