What would you do if your child was kidnapped, held in a secret location, and defiled? For one father, it led him to give up everything he has spent his life working for, including his job, in the pursuit of justice for his daughter.

As Alexander Mwenga narrates the chronology of the events his family experienced, it is evident that he is still in a lot of pain over what he, and they, suffered in this pursuit of justice. His tale is one of many defeats in the hands of a justice system which is meant to protect the weakest in society, such as his daughter. 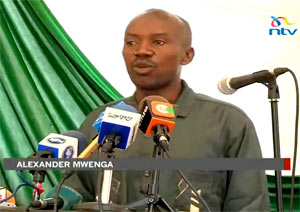 Mr. Alexander Mwenga, who lost a daughter to kidnapping, sexual assault, and death, speaks at the launch event of the Kenya Sex Offenders Register.

Almost every arm of the justice system in Kenya is indicted in the story of his many losses and the doors closed to him, including his daughter’s death. However, today maybe there is hope, as Kenyans are gathered to acknowledge some milestones in the strengthening of the system created to safeguard the right of Kenyans to be free from sexual violence.

At the April 24, 2012 launch event, the Sexual Offences Task Force achieved the milestone of handing over the completed draft of the Chief Justice Rules on Practice and Procedure, which are required to implement certain provisions of the Sexual Offences Act.

The Chief Justice also used the occasion to launch the Sexual Offenders Register, another huge milestone. This is a database, created by the Judiciary, that will hold the record of all convicted sexual offenders, including their names, identification card numbers, the crime committed and the age of their victim.

This kind of database is unprecedented in Kenya and has long been needed as the key mechanism for tracking sex offenders and ensuring they do not repeat these offences. Now, with the database in place, it will be possible to enforce restrictions on offenders, such as preventing them from working in schools or with children in other settings.

The presence at the gathering of the Attorney General, the Office of the Director of Public Prosecutions, the Government Chemist (who is charged with analyzing forensic evidence) and other key stakeholders, along with strong representation from civil society to publicly endorse these rules, made this a major event. This widespread show of support from government and non-governmental organizations for the development of the law is heartening. What now remains is for the Chief Justice to gazette the rules (make them law).

As the launch drew to a close, I had a chance to chat with the Chief Justice, Willy Mutunga. He noted the important role that forensic evidence plays in the successful prosecution of sexual violence cases. He lauded PHR’s efforts to support the capacity in forensic evidence collection and stated his intention to include PHR and other similar organizations in the working of the Council for the Administration of Justice. It was a meaningful endorsement for our work.

As I left the venue, it was with a realization that this has been a long journey, and the country has come a long way to the point where we can have a sex offender’s registry. It is worth pausing to celebrate these milestones.