Skip to content
Rohingya women wait to be seen at the Hope Foundation clinic outside Balukhali camp in Bangladesh, which treats many of the nearly 700,000 Rohingya refugees who have fled extreme violence in Myanmar. Photo: Salahuddin Ahmed for Physicians for Human Rights.

Every day is a busy day at the Hope Foundation clinic outside Balukhali camp in Bangladesh. The small facility teems with Rohingya refugees who have fled a campaign of brutal violence by the Myanmar military. The week I was there last December, there was a man with a bullet wound, a woman with facial burns, and more women with tiny babies than I could count. The infants reminded me that some of these women made the harrowing trek to safety – through the jungle and across a river – while very pregnant.

The MedGlobal volunteer health workers at the clinic tend to these extraordinary traumas, but also to the day-to-day health needs – waterborne diseases, respiratory infections, and, increasingly, diphtheria and measles – that have become inevitable in the crowded refugee camp. 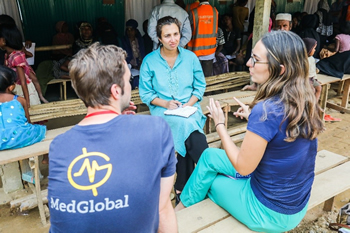 We’ve all been to the doctor. Maybe we’ve even been in an urgent situation where the doctor had to reset a bone or address another critical injury. So we can intuitively understand why medical workers are so important in a refugee camp. Obviously, the nearly 700,000 Rohingya who have surged into Bangladesh seeking safety require both urgent and regular medical care. Attending to their physical needs is job number one for medical workers in a complex humanitarian situation.

But doctors have another, equally important role to play when a human rights crisis leads to a humanitarian disaster. Dr. Vincent Iacopino, Physicians for Human Rights’ (PHR) senior medical advisor, once told me that after working for many years in refugee camps providing primary care, he decided to shift his focus to human rights because he wanted to get “upstream of the problem.” At PHR, we try to get upstream by collecting medical evidence of torture, sexual violence, and other human rights violations – evidence that can be used to stop these crimes and bring perpetrators to justice. 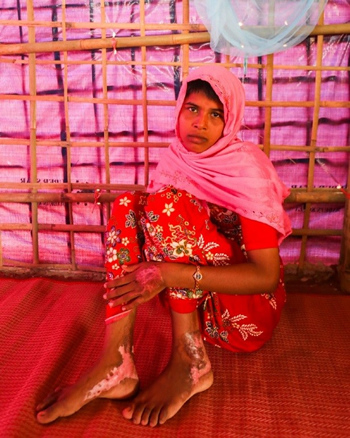 A Rohingya girl at the Balukhali refugee camp in Bangladesh. She was struck on the head with a machete by Myanmar military and left to die in her home, which the military had set on fire. She managed to crawl out but suffered terrible burns on her hands, feet, and back. Photo: Salahuddin Ahmed for Physicians for Human Rights

Despite their grueling schedules, the MedGlobal volunteers welcomed me and my PHR colleagues to their clinic. As they treated the Rohingya refugees’ wounds, my colleagues forensically documented the injuries. In this small clinic, in the midst of this humanitarian catastrophe, I saw an extraordinary example of medical professionals collaborating to treat their patients and to advocate for justice – using the tools of science and medicine.

Our team of PHR doctors documented that a machete wound to the head and burn patterns on a woman’s hands and feet were consistent with her story of being left to die, unconscious, in a burning hut. We met a man who had been shot in the back as he was running away, and children who were shot while inside their homes when the military sprayed the village with bullets. The scars on their bodies were consistent with the stories that they told us of their abuse in Myanmar and the trauma of their escape.

The machete and gunshot wounds, the burns, the broken limbs are all slowly healing, thanks to the work of our primary care colleagues. But the scars, both on the body and the mind, can last a lifetime. The work of PHR is to ensure that the world sees these scars – the hard evidence
of what happened to the Rohingya. 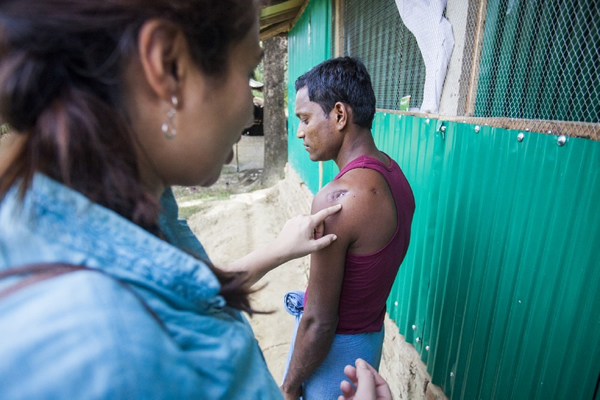 PHR’s Dr. Rohini Haar documents the injuries of a Rohingya man who was shot by Myanmar forces after they attacked his village. The wounds are consistent with his account that he was shot from behind as he fled. Photo: Salahuddin Ahmed for Physicians for Human Rights

Through this documentation, we are building a case that the people who committed these savage acts committed crimes against humanity. We are ensuring that the voices of the Rohingya are heard and that the medical evidence of these atrocities will support future justice processes that will punish their persecutors.

This is painstaking work, and justice can sometimes be slow in coming. Consider the recent conviction of Ratko Mladic for crimes he committed in the former Yugoslavia more than 20 years ago. Forensic evidence collected by PHR helped to seal that verdict – and bring a measure of peace to the victims’ families. We hope justice for the Rohingya will come more quickly, and we will continue documenting cases and contributing to the evidence base. Because we know that health workers have a responsibility not only to treat their patients, but to advocate for their rights and to demand justice. 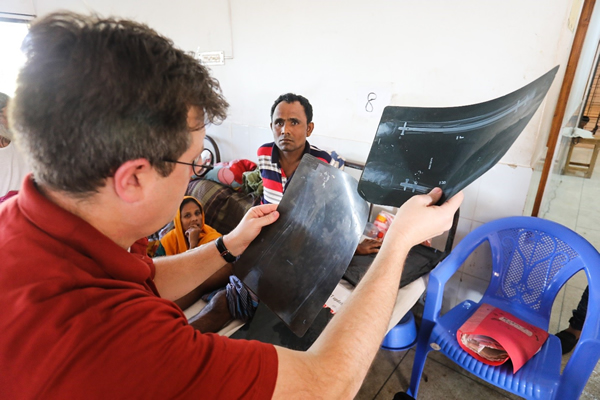 PHR’s Dr. Homer Venters documents the injuries of a Rohingya man who had both of his legs broken during a savage beating by the Myanmar military. Photo: Salahuddin Ahmed for Physicians for Human Rights.