On the morning of her confirmation hearing, virtually nothing is known about Gina Haspel, President Trump’s choice to lead the CIA. The agency has kept nearly every detail of her background a secret from the public and from Congress – an effort ultimately overseen by Haspel herself, as acting CIA director. But based on public sources, we know this: Haspel held leadership roles in the CIA’s post-9/11 torture program and, as such, holds the shameful distinction of having helped the United States physically and mentally break human beings.

From October to December 2002, Haspel ran the CIA’s first “black site” prison in Thailand. Under her supervision, a Saudi detainee named Abd al-Rahim al-Nashiri was subjected to waterboarding – a form of mock execution by suffocation. Waterboarding is a particularly cruel practice in which the torturer exercises total control over a victim, including restricting the very act of breathing.

Water is poured over a cloth that covers the victim’s face. As airflow is cut off, rising carbon dioxide levels in the victim’s blood tell the brain that it is asphyxiating – triggering intense panic and terror. In addition to mental trauma, waterboarding carries extreme physical risks, include asphyxiation, hyponatremia, heart attack, and death. Al-Nashiri was waterboarded at least three times under Haspel’s supervision.

Under Haspel’s supervision, the interrogators immediately set to work. Naked but for his shackles and hood, Nashiri was locked into a coffin-like wooden box for hours at a time. When his answers were deemed evasive or inadequate, he was sometimes moved into the smaller box for up to two hours as additional punishment. After being extracted from one box or the other, the cables show, Nashiri would sometimes be led in his shackles to the plywood wall, where a rolled towel would be wrapped around his neck. That allowed the interrogators to slam him loudly into the wall while minimizing the risk of whiplash…. Nashiri’s questioning unexpectedly halted at the end of November when The New York Times learned that al-Qaida suspects were being held in Thailand.

Once the Thai prison was closed, al-Nashiri was transferred to other black sites, where he endured an additional four years of CIA torture. One of the most horrific abuses he endured included so-called rectal feeding, an ostensibly medical procedure that in fact lacks any medical justification. Instead, it was inflicted – according to the CIA’s own records – to control the detainee’s behavior. Rectal feeding causes psychological damage and, in some cases, rectal injuries. Physicians for Human Rights (PHR) has denounced it as a form of sexual assault masquerading as medical treatment, performed by the CIA to degrade detainees.

To date, al-Nashiri is the only detainee identified in the public record as having been tortured under Haspel’s watch, and PHR medical expert Sondra Crosby, MD is one of the few health professionals he has spoken to about his experience. Upon evaluating him, Dr. Crosby diagnosed al-Nashiri with complex post-traumatic stress disorder with “somatic complaints, nightmares, hypervigilance, flashbacks, numbing, and a host of other symptoms.” The content of those nightmares remains classified, shielded from public scrutiny. In addition, Dr. Crosby has documented the damaging health consequences that linger from al-Nashiri’s torture, including chronic physical symptoms and injuries. In more than 20 years of experience treating torture victims from around the world – including prisoners tortured under the brutal regimes of Libya’s Muammar Gadhafi, Syrian President Bashar al-Assad, and ISIS – she says he “presents as one of the most severely traumatized individuals I have ever seen.” PHR has filed multiple amicus briefs speaking to the enduring suffering and harm inflicted on al-Nashiri.

The CIA site in Thailand formed the blueprint for the rest of the CIA torture program. After her assignment there, Haspel continued to hold senior operational roles in the program, where presumably she would have been in a position to know about other abuses at other sites. Moreover, she was an enthusiastic supporter of the program and worked to protect it from criticism. This included drafting a cable ordering the shredding of videotapes depicting torture sessions, despite a court order staying their destruction. This act of cover-up should have led to Haspel’s dismissal – and should most certainly disqualify her from the role of leading the CIA.

The CIA operated a program designed to break the will of its captives through torture. This program was aided and abetted by health professionals enlisted to monitor torture sessions, calibrate pain, and, in some cases, inflict injuries. The methods the agency chose were meant to psychologically shatter its victims without leaving physical scars. But, as PHR clinicians and others have shown, these abuses did in fact leave documentable injuries and permanent psychological damage. The public should know these details in full, as well as Haspel’s record of torture and destruction of evidence.

Torture is not just an act of physical violence, it is a way of destroying a person’s humanity. It is a way of severing all meaningful physical, mental, emotional, and social functioning. Al-Nashiri is irreversibly damaged by his torture and his trust in humanity is permanently fractured. He remains in profound isolation at Guantánamo Bay, where he does not receive treatment or rehabilitation for the torture that was inflicted on him. 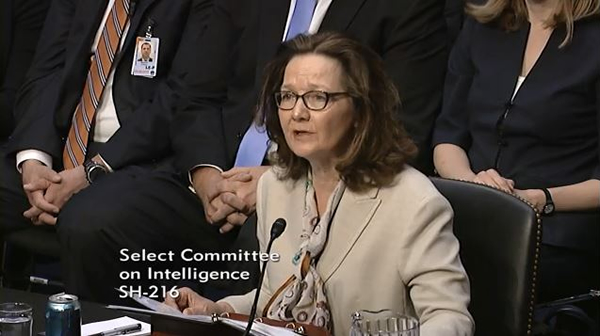 To this day, the CIA has avoided transparency – let alone accountability – for this shameful chapter of American history. Promoting Haspel, an advocate of the agency’s unlawful and immoral torture program, would reinforce impunity for such crimes and diminish efforts to ensure the United States does not walk down this dark, damaging path ever again. Worse, it would invite repetition: Haspel has already shown, by her actions outside the public eye, a propensity to follow orders to torture. Any oral commitments she may make in public in the future must be scrutinized in that light.

Making Haspel CIA director would effectively reward the agency’s use of torture and send a dangerous message to torturers around the world to continue their barbarity without consequence. We simply must do better by victims and survivors of torture and ensure these acts remain a part of history, never to be repeated.