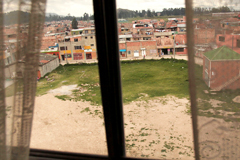 Earlier this month, PHR reported on the issue of “false positives”; civilians who were kidnapped and executed by Colombian military forces with the intent of identifying them as either members of the FARC guerrilla movement or other illegal armed groups. Specifically, we focused on the case of Mr. Fair Bernal Leonardo Porras, a 26-year old builder who was forcibly disappeared from a rural town in northern Colombia. Two of PHR’s consultants, Dr. Robert Bux and Nery Osorio had provided expert testimony on the case in January 2012.

Since that time, the judicial process has continued to move forward. A preliminary announcement on March 30, 2012 stated that the defendants would face conviction. Shortly afterward, the Second Special Criminal Judge of Cundinamarca handed down a guilty verdict against the six defendants; all members of the Colombian Army. The perpetrators; a major, lieutenant, corporal, and three enlisted men were charged with aggravated homicide and forced disappearance and sentenced to between 35 and 52 years in prison for their crimes. While reading her verdict, the judge referred to the forensic report and testimony brought to the trial by PHR experts Dr. Robert Bux and Nery Osorio as key to having reached her decision.

“Considering the maximum penalty allowed by the Colombian legal system is 60 years in prison, Dr. Bux and I are overwhelmingly pleased by the judge’s verdict and feel that justice for Mr. Porras has indeed been realized.” explained Ms. Osorio.

“This is a tremendously positive step forward for justice and rule of law in Colombia and I am pleased that PHR could provide some of the quality evidence and testimony that brought about this verdict. The prosecution and judiciary should be applauded for their dedication and professionalism and should serve as an example for others in the region.”

Physicians for Human Rights hopes that the court’s decision will bring some measure of relief and closure to the family of Mr. Porras and provide encouragement to the many families still seeking justice for their loved ones.