For the past seven years, the Syrian conflict has proven to be one of the most complex and brutal wars in recent history. Since 2011, the death toll has been immense and the amount of civilian suffering unimaginable. What makes this conflict especially horrifying is the infliction of constant and widespread human rights violations documented by Physicians for Human Rights (PHR), the United Nations, and others, including the kidnapping, torture, and killing of civilians and the bombing of civilian targets, including health care facilities. PHR has been at the forefront of documenting attacks on hospitals and medical personnel across Syria since the start of the conflict – attacks that are in clear violation of international humanitarian law. And repeatedly, when many thought the situation could not get any worse, chemical weapons have been deployed , inflicting widespread terror, suffering, and death.

On March 19, 2013, the Syrian government allegedly launched a chemical attack in Khan al-Assal, Aleppo, killing more than two dozen people. As residents buried the dead and the finger of blame was pointed in various directions, another attack occurred. In August of that year, more than 1,000 people were killed in Ghouta, rural Damascus, by sarin gas. The shocking images of men, women, and children foaming at the mouth and gasping for air sparked international condemnation and led to the adoption by the UN Security Council of Resolution 2118, establishing a joint mission to oversee the destruction of Syria’s chemical weapons stockpile.

This, however, did not end the continued use of these reviled and inherently indiscriminate weapons.

Since 2013, dozens more chemical attacks have been reported, 34 of which have been confirmed by the Independent International Commission of Inquiry on the Syrian Arab Republic, including a sarin gas attack in April 2017 in Khan Sheikhoun which killed more than 80 people, and which was in clear defiance of the Chemical Weapons Convention. PHR reviewed videos of the 2017 attack and confirmed that the symptoms displayed by the victims  were consistent with the use of the outlawed nerve agent. In addition, experts from the Organization for the Prohibition of Chemical Weapons-UN Joint Investigative Mechanism linked samples of evidence from the attack site to registered chemical weapons stockpiles belonging to the Syrian government.

But despite clear evidence pointing to the identity of the perpetrators, little has been done to thwart these and countless other continued breeches of humanitarian law. The Security Council has been paralyzed by Russia’s use of its veto power, obstructing any viable course of action to seek accountability and justice.

Throughout the conflict, Syrians, who fear recurring chemical attacks on their communities, have said they feel abandoned and forgotten by the rest of the world. Their fears are justified. Five years after the Khan al-Assal chemical attack, with a lack of any comprehensive international framework in place for the protection of the Syrian people, it has happened yet again. On April 7, 2018, in Douma in eastern Ghouta, the last rebel-held stronghold in the area, at least 70 people died and as many as 500 were injured in an apparent chemical attack.

Videos of the latest incident in Douma show men, women, and children lying lifeless, while others struggle for air and foam at the mouth – symptoms characteristic of a chemical attack.

But as the world watches these images, it no longer suffices to be shocked. It no longer suffices to convene Security Council meetings or hold press conferences that merely condemn these attacks. The shock and condemnation must culminate in more. The international community must enforce a plan for unhindered access for investigators to sites of attacks to allow thorough investigations, and a dedicated mechanism to hold the perpetrators accountable. Furthermore, a framework must immediately be set in place to ensure sustained protection of civilians, and continued, unfettered access to health care and humanitarian aid.

“We need to move from demanding accountability to actual protection of civilians and a real end to impunity, not only in the face of chemical weapons attacks, but for all mass atrocity crimes against the people of Syria, against health care facilities, and against health care providers themselves. We have to also make sure that the survivors of these horrible attacks can seek and receive impartial care when and where they need to,” Dr. Venters adds. 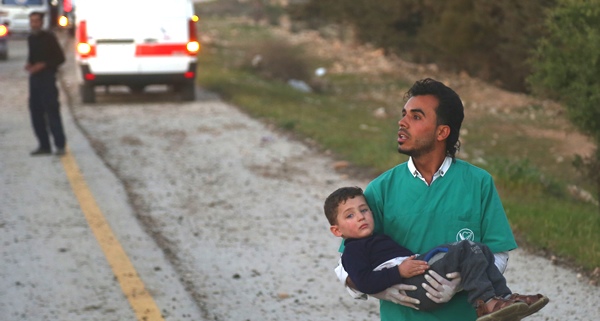 An injured Syrian boy is carried by a medical volunteer near the northern Syrian town of al-Bab, after they were evacuated from the last rebel-held pocket in Eastern Ghouta on April 3, 2018. NAZEER AL-KHATIB/AFP/Getty Images

With each chemical attack launched and with each hospital bombed or medical worker targeted with impunity, we risk normalizing this horrific and unacceptable flouting of longstanding humanitarian norms. It’s up to the international community to ensure that repeatedly violating universally accepted prohibitions against targeting civilians and using widely banned weapons does not become the new normal.