For many of the 34,000 immigrants detained each night by Immigration and Customs Enforcement (ICE), language is one of the major barriers to accessing services, including urgent medical care, in detention facilities.

While many detained immigrants speak fluent English, others come to the US with either limited or no knowledge of English. This complicates interactions between detainees and detention facility staff, including health service providers, and can lead to problems including delays in accessing medical care or difficulty describing symptoms to health professionals.

So PHR is gratified to see that the Department of Homeland Security, which includes ICE, has developed a Language Access Plan to help ensure that all detainees receive adequate medical care in detention, regardless of language.

The Language Access Plan outlines important improvements in providing medical information to detainees with limited English proficiency. For example, ICE personnel have access to telephonic interpretation services, which are available for use during medical consultations. DHS’ Office of Civil Rights and Civil Liberties (CRCL) has also developed a series of “I Speak” posters, which detainees can use to indicate their language, and has customized the posters for use during medical examinations. The Language Access Plan also envisions increased training for detention facility employees in identifying languages spoken by detainees and accessing interpretation services.

As an agency that deals primarily with non-English speakers, ICE has a particular interest in ensuring that all detainees are able to access services in detention facilities, regardless of language. The Language Access Plan outlines vital improvements that could significantly impact the medical care that immigrants receive in detention. It is a welcome step in ICE’s ongoing efforts to create a more humane immigration detention system. 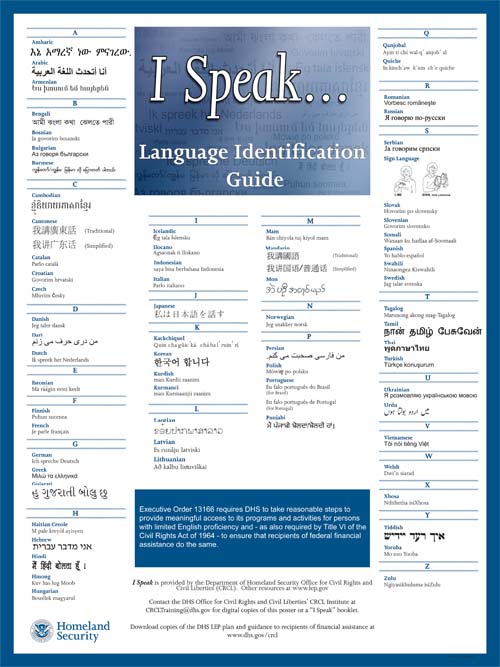