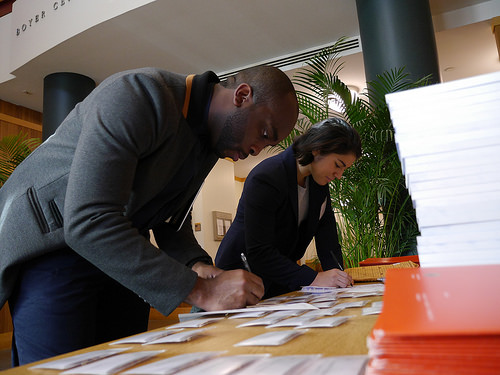 On a recent Saturday this October, a group of 40 health professionals squinted at two photos projected onto a screen in a Yale Medical School classroom. The photos showed a man’s ears—left and right—and atop each ear a pea-shaped mound of scar tissue.

“I’d say this scarring is consistent with an injury received after electrodes were attached to both ears,” said Dr. Katherine McKenzie, an internist and director of the Yale Center for Asylum Medicine in New Haven, Connecticut.

“Could it also be scarring from ear piercings?” asked one of the health professionals gathered in the room.

“That’s possible,” said Dr. McKenzie. The class then reviewed together what it means to classify a scar as “consistent with” a particular type of injury – the very nature of the definition acknowledges there are many possible causes.

The exercise was part of a daylong training run by the Asylum Program at Physicians for Human Rights (PHR) to teach doctors, psychologists, social workers, and other health practitioners how to recognize and document evidence of torture, sexual violence, and ill-treatment. Those health professionals can then use the skills to help people seeking asylum in the United States.

Dr. McKenzie has evaluated some 70 asylum seekers who have been tortured or abused back in their home countries and are now seeking refuge in the United States. Under federal law, people can be granted legal protection in the United States if they have a well-founded fear of persecution in their home countries based on their race, religion, national origin, membership in a particular social group, or political opinion. Evidence of torture or ill-treatment is often used to bolster claims of persecution in immigration court.

“There’s something about the work of seeing asylum seekers, interacting with them,” said McKenzie, who has been working as an asylum trainer with PHR for two years. “Hearing what happens to people, seeing their resilience — it inspires you, and you really feel like you’re able to contribute in a positive way to all the global displacement and global issues that are occurring.”

The health professionals gathered in New Haven—and at similar trainings PHR holds throughout the United States—come from many backgrounds but share an interest in helping people who have left behind homes and jobs and families to seek safety in the United States. After attending a PHR training, those health professionals can then sign up with PHR’s Asylum Network, a group of more than 500 volunteers who conduct assessments of asylum applicants nationwide.

“People always forget that you have to first document something that’s going on, and you have to do it in a way that it’s reliable and it can be used consistently,” said Dr. Husain Poonawala, a 31-year-old clinical fellow in microbiology who attended the Yale training this October. “People assume that, because you’ve trained as a clinician, it will be easy for you to do it. Not necessarily.”

Using slides and anecdotes, Dr. McKenzie shows trainees how to recognize and document scars that show evidence of torture and ill-treatment. A small circular scar might indicate burning with a hot poker; a ragged line may indicate someone was cut with a serrated knife.

At times, asylum applicants have physical scars that help bolster their claims of persecution. But increasingly, applicants evaluated through PHR’s network have no physical evidence of the trauma they’ve endured. During the October training, clinical psychologist Dr. Judy Eidelson discussed how best to conduct a psychological assessment of asylum seekers and detect the sometimes hidden signs of their suffering.

“Many of these people arrive and all they really have is their story. They don’t have the kind of evidence that the legal system would really like for them to prove their claims,” said Dr. Eidelson. “Health professionals are among those people who can bridge that gap by understanding and interpreting the physical and psychological symptoms that people carry with them, sometimes as the only evidence of what they’ve been through.”

Whether their scars are physical or psychological, the idea isn’t just to document the evidence — but to show whether or not the evidence gathered is consistent with the story an asylum applicant is telling, and then communicate that evidence to a judge in immigration court, often in the form of a written affidavit.

“Part of what we do here is bridge the gap between the medical world and the legal world,” said PHR’s Meredith Fortin, an attorney who runs the organization’s asylum program. “We want to show health professionals that they can use their skills to help to the influx of people seeking safety in the United States.”

Indeed, PHR has seen an upswing in the number of requests for asylum evaluations for people from Central America, in particular women and children fleeing domestic violence. Fortin said a majority of PHR’s asylum evaluations are now conducted on behalf of people from that region, and lawyers are often seeking psychological evaluations more than medical ones.

“The immigration court system in the United States can feel a bit like the wild west,” said Fortin. “The grant rates of asylum judges nationwide vary wildly, and asylum seekers often have little access to evidence to prove what happened to them. Our volunteer health professionals can help asylum applicants use the power of science and medicine to back up their claims. And we hope our volunteers can also become human rights defenders, advocating for a more just, more humane immigration system.”