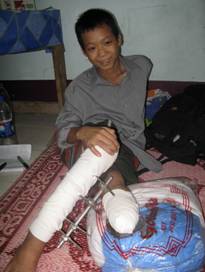 Fourteen-year-old Kyan Khen* unwittingly triggered a landmine that took his left leg, and severely injured his right, while tending to his four buffalo in a rice field just across the Burmese border in Karen state in October 2009. His family fled to Thailand several years earlier, but young Kyan Khen regularly made the journey back into Burma to farm. While the villagers had been warned that the fields nearby were strewn with landmines, they thought this particular field was safe. Kyan's shattered body proves otherwise.

I recently interviewed Kyan Khen at the Mae Tao Clinic. He bears a new prosthesis replacing his left leg, while his right recovers from the steel rod the surgeons inserted to stabilize the badly fractured bones in the correct alignment so that the leg will have a chance to heal and become weight-bearing faster. Kyan Khen cannot yet walk, and while he has an easy smile, his aunt relates how he often feels pain in his non-existent left foot and stares down in disbelief that it is gone. Such phantom limb pain is common among recent amputees.His story is in many ways a success, thanks to the Mae Tao Clinic in the Thai border town of Mae Sot, which provides lifesaving treatment, healthcare and counseling services to Burmese refugees. Founded and run by Dr. Cynthia Muang—herself a stateless person whose precarious status in Thailand imperils the clinic’s future—the Mae Tao Clinic added a prosthetics fabrication facility for landmine survivors and amputees in 2001.

Yet Kyan Khen faces a long recovery and a bleak future, because, as an amputee, he is unlikely to be seen as a productive member of society. Kyan Khen had wanted to attend secondary school and asked his mother if he could pursue studies, but she said he was getting too old and that she would instead send his younger brother. Without other prospects, Kyan Khen was left to tend to his buffalo to help provide for his family. This is not unusual. In many societies, children are responsible for tending livestock and often follow them into remote areas in search of new grazing lands, placing them at greater risk of encountering landmines. Now, without an education, his long-term disability severely compromises his ability to garner an income.

Landmines in Burma claim hundreds of casualties each year—one of the many devastating effects of the ongoing conflict between the Burmese military junta and Burma’s ethnic minorities. Karen State, where Kyan Khen is from, is one of the most heavily mined areas in Burma, according to the International Campaign to Ban Landmines (ICBL), and the casualties are on the rise. One estimate has 721 Burmese civilian mine casualties in 2008, up from 243 in 2006, although exact numbers are unattainable. Worldwide figures suggest that in 2008, 41% of all civilian landmine casualties were children. While many of the wounded die, the majority of landmine victims survive (88% in Burma in 2008), but are left permanently maimed. Moreover, they require immediate medical attention and long-term rehabilitation.

As a child, Kyan Khen faces even greater complications from a landmine injury than an adult. Children’s smaller stature increases the relative proximity of their vital organs to the source of explosion, and makes them less able to compensate for large amounts of blood loss; consequently, the injuries they sustain are often more severe than they are for adults. Even after a blast to the limb, the long bones that remain continue to grow, and maintaining that growth potential in the epiphyseal growth plate is critical. This is especially true for the youngest survivors, whose bones may be less than half the length of their adult potential. If the distal growth plate, which contributes 75% of total femur growth, is damaged, the stunted limb growth further complicates prosthetic needs for children.

Child mine survivors’ bones tend to grow faster than the surrounding soft tissue and sometimes this causes skin breakdown in the area. Consequently, children who suffer landmine injuries to their limbs may require multiple re-amputations and require new prostheses every six months because of these growth patterns. So Kyan Khen could need 10 replacement prostheses before he turns 20. By contrast, adults need prosthetic replacement every three to five years.

In Burma, where the annual per capita income is less than $200 USD, landmine survivors and their families are almost all too poor to afford prostheses and rehabilitation on their own. Even when produced locally, each new prosthetic device the Mae Tao Clinic fits and manufactures costs $15 USD – a bargain when compared with the cost of a prosthetic limb in the US, which can run as high as $1,875. Even so, the medical costs for young landmine survivors can be prohibitive, especially in Burma where the availability of prosthetics and medical care is acutely limited. In this respect, Mae Tao Clinic is an oasis of free surgical and post-operative care, prosthetic devices, and rehabilitation for landmine survivors.

Still, the healing hand of this clinic would never have been necessary if it weren’t for the barbarous use of these indiscriminate anti-personnel munitions. Worldwide, most victims are civilians (61% in 2008), and after landmines have served their military function those that remain undeployed are rarely thoroughly cleared. Burma is second only to Afghanistan in terms of land mine incidents in Asia, but while military groups and villages have undertaken sporadic mine clearance, no systematic humanitarian de-mining program exists in Burma.

Like Burma, the United States is not a signatory to the 1997 Mine Ban Treaty, or Ottawa Treaty. The International Campaign to Ban Landmines (ICBL), for which Physicians for Human Rights shared the 1997 Nobel Peace Prize, put an end to the use of landmines within reach by bringing global energy to the treaty efforts. However, bringing that end to fruition requires focused attention to mine clearance and more stringent compliance with treaty obligations to discourage any production, use or transfer of anti-personnel mines.

US accession to the Ottawa Treaty would send a powerful, albeit long-overdue moral message, that it renounces this outdated weapon that indiscriminately targets civilians and children like Kyan Khen. Right now there is unprecedented momentum that could result in the Obama Administration joining the Mine Ban Treaty. Read more about this trend in PHR’s landmine blog series and urge President Obama to sign the Mine Ban Treaty today.

Kyan Khen’s new prosthetic leg and smile are testament to the hope that clinics like Mae Tao provide to survivors. But what he and countless other children around the world need is for the United States and other hold-out countries to ban landmines all together.

*For his protection, Kyan Khen’s real name is not used in this article.