PHR, working with colleagues at Panzi Hospital in Bukavu, eastern Congo, and in collaboration with the Nobel Women’s Initiative and many others, had the privilege of convening one of many events across the globe to launch a new civil society effort to stop address sexual violence in conflict zones.

The following summary comes from the new Coordinator in the Democratic Republic of Congo (DRC) of PHR’s Program on Sexual Violence in Conflict Zones, Caroline Dauber.

On May 11 at the Hotel Residence in Bukavu, 130 representatives of civil society organizations as well as individuals gathered to learn about the International Campaign to Stop Rape & Gender Violence in Conflict.

Following the speeches, those assembled debated the goal of the Campaign and its strategy. The discussion centered around three points taht we made repeatedly:

Moreover, aid from the international community which has been delivered to Eastern DRC for the last 15 years has not yielded the desired results. As many international donors have strategic interest in the region, external funding and coordination mechanisms often prevent local initiatives from bringing about sustainable development. Participants strongly emphasized that much aid has gone to the consequences of the conflict, and not enough to address the root causes and the prevention of violence.

Everyone present agreed that visibility is a necessary tool to stop rape and gender violence, and that the Campaign will provide Congolese people with the necessary visibility and platform to take action.

More than 50 NGOs and dozens of individuals joined the Campaign. Needless to say the event was a success! 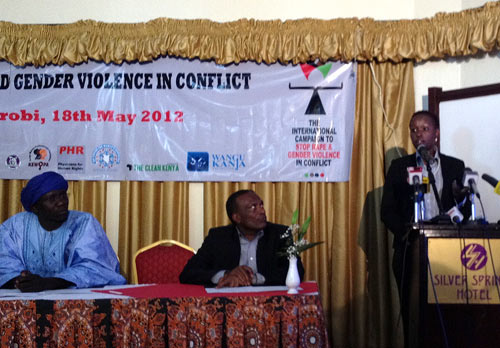 Rachel Muthoga from Physicians for Human Rights presents on the lack of rule of law in Kenya and why ending impunity for sexual violence is critical.