Each International Women’s Day we acknowledge the people whopromote the advancement of women and highlight the progress achieved over thepast year.

Today, in honor of International Women’s Day, PHR reaffirmsour commitment to comprehensive justice for survivors of sexual violence andsupport for those working on the front lines to help them.

Throughour Program on Sexual Violence in Conflict Zones, we strive to improve women’shealth, ensure greater access to justice for women, and give women an increasedvoice.

PHRis committed to the physical and mental well-being and essential dignity of womenand girl survivors of sexual violence. This should extend through the entirejustice system—from the health clinic where a survivor first seeks care, tothe police station where she is interviewed, to the courthouse where shetestifies against her attacker. 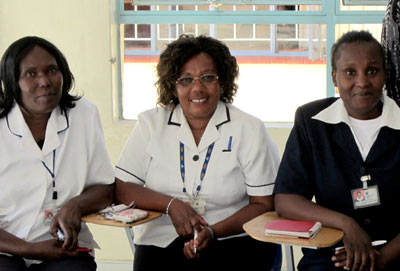 TheProgram on Sexual Violence in Conflict Zones also works to increase the role ofnurses, social workers, and other professionals involved in the forensic collectionand documentation of evidence.

Many—if not most—of these health professionals in the region are women. Shiftingthese important tasks to nurses in addition to doctors is imperative,especially given the shortage of qualified physicians in remote regions. Often, a physician’s signature is required onmedical forms that are used in court, so PHR and our local colleagues areadvocating for forensically-trained nurses to be permitted to sign these forms aswell.

Women who survive sexual violence are entitled to a day incourt. Although sexual violence laws are “onthe books” in many countries, the barriers preventing women fromconfronting their attackers in court are still high.

Because of stigma and security concerns, survivors are oftendiscouraged from pursuing justice in court—frequently by their families andcommunities but also by the professionals from whom they seek help.

"Justice" can come in many forms, from the acknowledgementof the crime and resulting arrest, to prosecution in a court of law, and toreparations provided to a survivor including compensation.

PHR and our partners in Kenya and DRC are working to educatehealth care professionals, police, lawyers, magistrates, and judges to act withgreater sensitivity when they collect forensic evidence or support womenthrough trials. We encourage judges to admit a wider range of physical,psychological, and crime scene material as evidence of rape. Once the communities begin to see more successfulprosecutions, we hope it will encourage women and girl survivors to seek justice. 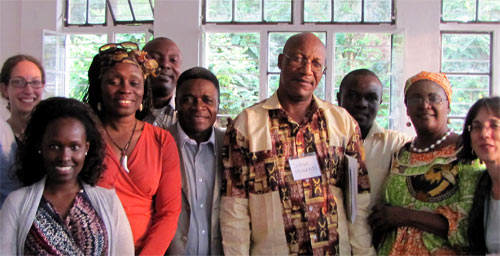 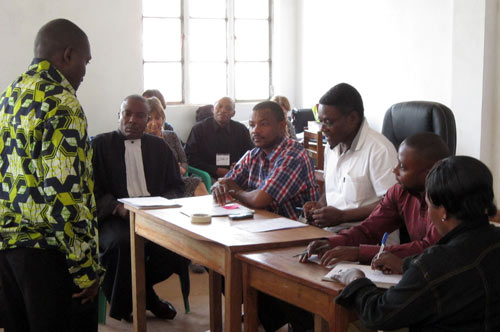 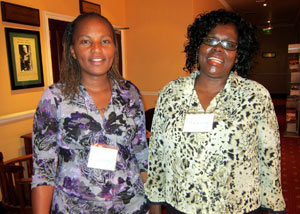 At the Nairobi Roundtable in December 2011, representatives from survivor organizations lent their voice to the discussion on sexual violence response in the health and justice systems. From left: Wangu Kanja, Executive Director of the Wangu Kanja Foundation and Mercy Musomi, Executive Director the Girl Child Network.

If we are going to address sexual violence in a sustainableand meaningful way, we must listen to the wishes of women and girl survivors. Strengtheningthe voice of women and girls within the health and justice systems is paramount.

So many survivors desire the ability to participate fully andsafely in the economic, social, and cultural life of their communities. With improved attitudes and reduced stigma, togetherwe can help women and girls raise their voice amidst the silence surroundingsexual violence.