In an op-ed published this weekend in the Global Post, I argue that the Obama Administration must establish benchmarks and present credible consequences should its new strategy of engagement fail to produce movement toward real political change within Burma. The minimum price for continued dialogue should be the unconditional release of all political prisoners and the immediate cessation of rights abuses against ethnic minorities—without which there can be neither free nor fair elections in 2010.

By meeting with the Americans, Than Shwe has already procured what he craves most—international legitimacy—and revocation of it is perhaps the best hope for a shift in Burma. If these series of high-level diplomatic talks do not result in any significant positive change by the military junta, the United States should fully implement tougher sanctions already allowed by the 2008 Burmese JADE Act and press the UN Security Council to launch a commission of inquiry into crimes against humanity in Burma. 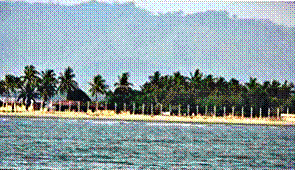 Burma's barricade, along the Bangladeshi border, under construction to keep Muslim minorities from returning to their rightful home.

Burma’s military regime has maintained its intransigence for decades in the face of outside demands for change. As the United States tries to alter that posture, it must not forsake justice and accountability for toothless diplomatic engagement.