On June 27, Physicians for Human Rights and Torture Abolition and Survivors Support Coalition (TASSC) International held a briefing at the Capitol entitled “Psychological Torture in Detention” in recognition of Torture Awareness Month.

The discussion centered on the use of psychological torture on individuals in detention through practices such as prolonged indefinite detention and abusive solitary confinement. Kristine Huskey, Director of PHR’s Anti-Torture Campaign moderated a panel with torture survivor Pedro Mangue, psychiatrist Dr. Lynne Gaby, and PHR Asylum Advocacy Associate Mike Corradini.

Kristine Huskey opened the briefing by discussing the concept of psychological torture and how it is used by the US in national security detentions such as at Guantánamo, and immigration detentions, which share similar characteristics. In both types of detention, detainees are not convicted. Instead, the detention is for non-punitive purposes.

Despite the non-punitive intent of national security and immigration detention, individuals in such detentions are indefinitely confined and often placed in solitary confinement. This results in damaging psychological and physical effects as detainees are placed in custody with no way of knowing if or when they will be charged with a crime or if they will be able to see family again. Effects of indefinite detention and solitary confinement can include depression, severe and chronic anxiety, schizophrenia, personality changes, hypersensitivity, hallucinations, and panic attacks.

Pedro Mangue told of his experiences being repeatedly tortured in prisons in Equatorial Guinea, only to be immediately detained by Immigration and Customs Enforcement (ICE) when he finally escaped and asked for asylum in the United States. He also conveyed how he was subject to conditions such as extreme cold and isolation and deprivation of mental stimulation while in US immigration detention, making him feel that he was reliving what he had tried to escape. His story demonstrates how the effects of the torture he faced in his home country were magnified by the added stress and confusion of immigration detention—a reality that many asylum seekers in the US face.

Mike Corradini’s testimony focused largely on immigration detention and the challenges that asylum seekers arriving in the US face when put into detention. He reiterated that the incredibly frustrating system, conditions of the detention centers, treatment of detainees, and prevalence of indefinite detention, all contribute to the overwhelming psychological stress faced by detainees.

The discussion highlighted the fact that individuals detained under both types of detention are often detained for indefinite periods and kept in solitary confinement, resulting in psychological and physical harm that in some cases may rise to the level of torture, or cruel, inhuman, and degrading treatment. Changes need to be made to both systems in order to ensure humane treatment of asylum seekers and other detainees.

Those in attendance at the briefing were able to gain a deeper understanding of the detention system and the need to address the effects of solitary confinement and indefinite detention. 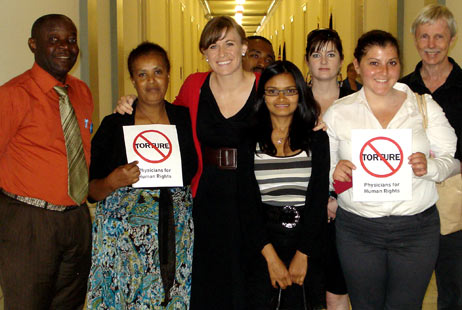