This Saturday marks one year of fighting between the Burmese Army and the Kachin Independence Army (KIA) in northern Burma.

The fighting highlights issues faced in many areas of Burma today: the strained relationship between the central government and ethnic groups, the dangers associated with foreign energy companies and extractive industries, the inability of the central government to control the military, and persisting impunity for ongoing human rights abuses.

Fighting erupted in Kachin State last year when Burmese troops guarding a Chinese hydroelectric project encroached upon territory controlled by the KIA, the military wing of the Kachin Independence Organization (KIO). This act sparked the end of a 17-year ceasefire, although many Kachin previously were dissatisfied with the government because they felt that elements of the 2008 Burmese constitution limited their representation in government, and because some of their political parties were forbidden from participating in the 2010 general election. Burmese logging and mining operations in Kachin State that prioritized profit over the wellbeing of civilians added to the tension. 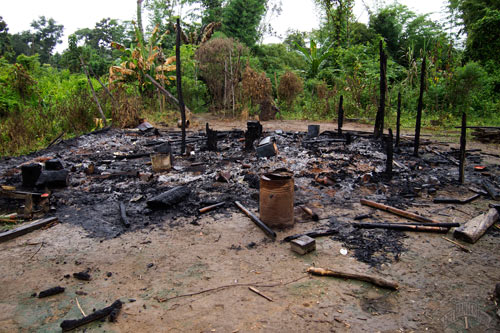 This house was burned to the ground by Burmese Army forces. Photo: Kachin Women's Association Thailand

I visited Kachin State in September of last year, only three months after the fighting began. My goal was to corroborate reports of human rights violations, determine the humanitarian needs of civilians displaced by fighting there, and inform the international community about what was happening in the region.

At that time, news reports from Kachin were scarce, overshadowed by reports touting the positive changes occurring in urban areas of the country. Also at that time the UN had delivered aid to about 6000 internally displaced people (IDPs) in Burmese Army-controlled areas, but the UN showed reluctance to address the full spectrum of basic needs or even acknowledge IDPs in China or areas controlled by the KIO.

At the time of my visit, the groups delivering assistance were receiving almost no aid from external sources. The situation was so dire in some of the camps that IDPs were asked to go home, as food and medicine had run out. The food pipeline was tenuous, and the people running the camps expressed concern about how they would be able to offer continued assistance if the fighting were to continue.

When I was there, IDPs were living in temporary shelters in community centers and empty markets, and the Kachin relief committee had plans to expand a refugee camp on the outskirts of Laiza. But IDPs continue to arrive even now, outpacing construction efforts, and some are still housed in temporary quarters in Laiza town.

The IDPs I interviewed told me stories about how the Burmese Army attacked villages, stole food, and forced them to sweep for mines and carry supplies. They told me stories about Burmese Army abuses before the 1994 ceasefire and how they heard about abuses in nearby Karen and Shan states and decided to flee before troops reached their villages. Most of them told me they wouldn’t to go back to their villages until the KIO said it was safe. Despite 17 years of relative peace, villagers still had no trust in the Burmese Army.

That was eight months ago. Since then, fighting has continued, as have human rights abuses. In a report released today, the Kachin Women’s Association of Thailand (KWAT) highlights regular and widespread sexual violence committed by the Burmese Army under a system of impunity. Since June 9th of last year, KWAT has documented 43 cases of rape by the Burmese Army, 21 of which were also murders. The researchers also cite cases of the Burmese Army abducting women to use as sex slaves.

The Burmese government has refused to hold the Army accountable for these crimes. One husband of a woman who was abducted and disappeared filed suit in the Supreme Court in Naypidaw, Burma’s capital. An Army lieutenant testified that he had never heard of the woman, and court dismissed the case without hearing testimony from the husband. Similarly, the National Human Rights Council (NHRC) of Myanmar has refused to investigate any abuses in conflict areas, including in Kachin State. The failures on the parts on the Supreme Court and the NHRC are unfortunate and all too common in Burma; perpetrators of human rights violations there have never been held accountable for their crimes.

Since my visit to Kachin State, the Burmese government has granted the UN access to IDPs, and the UN has sent shipments of blankets and food. The international community has given some money to help the IDPs, but problems remain. KWAT reports that there are now about 75,000 displaced people scattered in at least 29 camps across Kachin State. The Free Burma Rangers (FBR) state that the cost of feeding IDPs is nearly $1million per month.

Although Burma has lifted the blockade on relief, fighting and donor country regulations which require that aid is funneled through a central government and not community-based groups or political insurgents, have limited the delivery of much-needed supplies.

In the meantime, fighting continues. FBR says that the Burma Army now has about 8,000 combat troops in Kachin State, some of which are closing on the KIO capital of Laiza. They reported on fighting in six different areas of Kachin State in May.

The president of Burma, Thein Sein, has twice called on the Burmese Army to stop its offensives in Kachin State, and both times the Army continued fighting. The KIO and the Burmese government have engaged in several rounds of peace talks, but so far no agreements have been made.

One year into Burma’s latest crisis and nearly two years since a nominally civilian government was elected, the same problems that have plagued Burma for decades are still evident. It is clear that the Army is more powerful than the government, that it is continuing to commit human rights abuses, and that there has been no effort to hold these perpetrators accountable. On this sober anniversary, we the international community should come together to press the Burmese government to end attacks on civilians in Kachin State and hold perpetrators of human rights violations accountable. 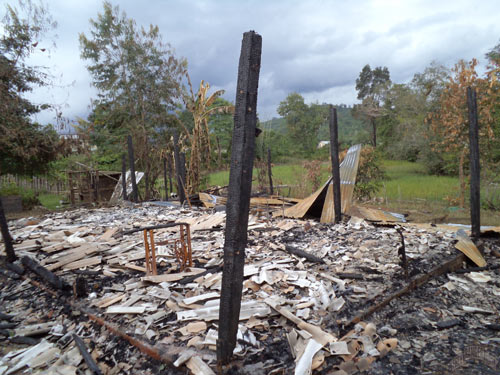