Tuesday, August 9, marks one month since South Sudan’s official independence and international recognition as Africa’s 54th state. As the new nation begins to form its policies on development issues, its leadership and citizenry must successfully overcome several obstacles. The international community must remain apprised of – and involved in – South Sudan’s progression toward stability and state building. This is the second post in a three-part series that will address the major questions central to South Sudan’s development. Read the first post and check back later this week for the third.

How can South Sudan move towards peaceful resolution of the ongoing border conflicts with the north? How and to what extent should the international community intervene in ending this violence?

The border disputes between Sudan and South Sudan, discussed in our previous post, persist. Particularly in South Kordofan and the Nubamountains, the media continues to highlight allegations of ethnic cleansing,extra-judicial and indiscriminate killings, direct targeting of civilians, and evidenceof mass graves. Sudan President Omar al-Bashir’s government forces areimplicated as the primary perpetrator of systemic killing and human rightsviolations in the contested areas.

Media and humanitarian access to the conflict regions isseverely restricted. Both national and ex-pat aid workers have been targets ofthe violence. Sudanese authorities obstruct the UN peacekeeping force fromfulfilling its mandate in the region, and UN investigators cannot gain the necessaryaccess to look into the alleged atrocities. 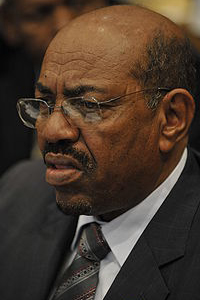 Sudan President Omar al-Bashir is wanted by the International Criminal Court for atrocities in Darfur. (photo: US Navy/Specialist 2nd Class Jesse B. Awalt)

In the border states of Blue Nile and South Kordofan,residual problems from the 2005 Comprehensive Peace Agreement (CPA) continue tocomplicate the border demarcation. The CPA ended Sudan’s long-running civil warbetween the Islamic north and Christian and Animist south, allowing South Sudanto become an autonomous region in 2005. However, Blue Nile and South Kordofanstates, both aligned with the SPLM (the south’s rebel military) during thecivil war, fell north of the border.

Upon South Sudan’s official independence from the north lastmonth, the Sudanese government aimed to absorb the Blue Nile and South Kordofanmilitias. However, dissidents in these states argue the popular consultationprocess failed and thus refuse to align with President al-Bashir’s government.This has led to military strikes by al-Bashir’s forces against SPLM groups inSouth Kordofan, resulting in widespread destruction and reported atrocities. Theviolence threatens to spill over into Blue Nile.

The historically contested, oil-rich region of Abyei isanother concern requiring resolution. An international arbitration tribunal in2008-2009 resulted in a revision of Abyei’s borders and a power-sharingnegotiation in which Abyei would be controlled by both the north and the south;however, by 2010 the borders had yet to be officially demarcated or recognizedby the Sudanese government.

Territorial and tribal disputes within Abyei were compoundedby the ongoing north-south debate over control of the region. Violent conflictescalated in May 2011, resulting in looting and burning of homes and massivepopulation displacement. Despite the deployment of United Nations peacekeepingforces and a current ceasefire, both Sudan and South Sudan continue to laygeographic claim to this region.

Identifying a resolution to each of these conflicts is asurmountable challenge, particularly in light of President al-Bashir’s statedmotivation of suppressing ethnic diversity to establish an Arab-Islamic regime.Thus, the international community must immediately take a more robust stanceand enforce a zero-tolerance policy for human rights abuses wielded by theSudanese government. Global actors mustpressure President al-Bashir’s regime to immediately cease all militaryoffensives that result in widespread civilian casualties and threaten todestabilize the South’s peace and development process.

History shows us that peaceful compromises regarding theborder disputes are unlikely to succeed without significant internationalarbitration and action on behalf of innocent civilians.

Emily Winter is a graduate student and programs intern at PHR.