The health workforce crisis in Uganda is immense. Uganda is reportedly losing at least 1,400 skilled professionals each year, and there are only 29,000 medical personnel in a country of 31 million people. Consequently, the health system is suffering, and most often the blame falls on health workers, as they are on the frontline and seemingly represent the health sector. In the past eight months, since I’ve been in Uganda, media coverage of the health system has almost always focused on the negative aspects of health workers, further demonizing a field that is made up largely of hard working people.

These news stories reflect the public’s negative perception of health workers, who are almost always associated with being unqualified, incompetent, rude, corrupt, and thieves. Furthermore, personal stories shared with me about using the health system are most often about being ignored and mistreated — not about receiving good care by caring health workers.For those of us advocating for health workforce development, the negative image of health workers makes it more difficult to garner support and foster dialogue. We should honor the truth of people’s experiences with health workers and the health system, but the problem is complex and there are many underlying factors that need to be addressed. Health workers are overworked, underpaid, and lack proper resources and equipment. Yet the majority of health workers still show up to work and perform their duties. If they didn’t, the health system would completely collapse. At the same time, we should expect and demand a standard of care from our health workers. 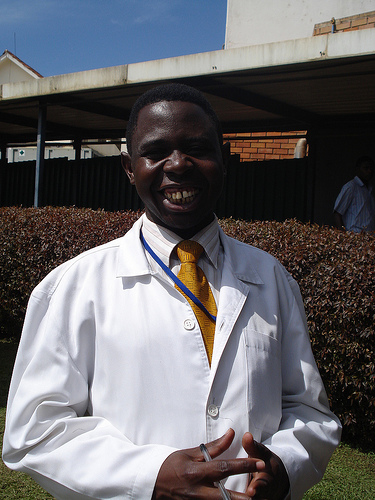 Given the complexity of the issue and the lack of easy answers, I wanted to highlight one health worker who I feel exemplifies the notion of a dedicated and ethical health worker. Mitterand Kiirya is a research nurse for the Antiretrovirals for Kaposi’s Sarcoma (ARKS) study at the Infectious Disease Institute (IDI) at Mulago Hospital, the largest national referral hospital in Kampala, Uganda. For the past 2_ years, he has been working with HIV-positive patients who have Kaposi’s Sarcoma. Previously, Mitterand worked at Uganda Cares, an antiretroviral access initiative in Masaka.

I first heard about Mitterand through my roommate, a U.S. medical student working with him at IDI. She would often talk about his dedication, and how he would invite her to join him on visits to the countryside 6–7 hours away from Kampala to check in on his patients in their homes. This was not part of his duties, but something he did on his own time. But most of all, she would always talk about how he inspired her to be a good doctor, because he always put the patient first. And, despite all the challenges he faced, he always remained positive and managed to smile and make people laugh everyday.

Here are some highlights from a recent conversation I had with Mitterand:

Why did you want to become a nurse?

It was from watching my mother. She is a mid-wife in my village, Namugong, Kaliro [in the Eastern part of Uganda]. I watched her passion for her patients. How she cared for them, wanting to alleviate their pain. What I saw was that she tried to understand the patient, and I wanted to do the same thing.

What does it mean to understand your patient?

Well…before seeing the doctor, the patient has a lot of anxiety, especially when they are referred from place to place. So I try to sit and talk to them before they see the doctor, prepare them to receive what the doctor will tell them.

What do you see as the role of the nurse?

As a nurse, I try to reverse what was impossible, and make it possible. I try to bring a message of hope and new life, especially with my patients who are HIV-positive. If you haven’t even given the message of assurance, then it’s the equivalent of not having come to work that day. People have encouraged me to further my studies, and become a doctor. I have thought about it a lot, but I don’t want to lose the contact with my patients, which I think happens sometimes with doctors. So, right now, I’m staying a nurse, staying with my patients.

You often see that nurses, or health workers in general, get discouraged by their work environment. What do you think about this?

Yes, I do see some of my colleagues who are not working. But what I try to do is motivate them. Remind them about the ethical requirements of our profession, but also try to serve as an example for them too. But, I tell them that “ we are here to serve our profession, give the service and think about the quality of your services, the quality of your service should determine your cost”. But you must work hard.

I know the system is broken. Infrastructure is inadequate, and the environment is making it difficult. We are losing the confidentiality of the patient, because we are sharing spaces with only curtains to divide, and sometimes not even that. I am always trying to improvise to keep the patients alive.

How do you stay motivated?

Tell me about the award you received from Alicia Keys.

When I was working at Uganda Cares in Masaka, she contributed ARVs and general support for HIV-positive children. She found me at Masaka, working as a nurse, she was told through my director, my medical director, Dr. Bernard Okongo. He introduced me as a hardworking nurse, who was dedicated with total love for his profession. I received an award and took a picture with her. It was a big ceremony held in Masaka.

I felt very…actually felt humbled really, for the public to appreciate my contribution and my profession, I felt humbled. I felt so humbled. In this country, what de-motivates people, you can serve, but failure to appreciate your service is another big issue. If the services we are offering are appreciated, the level of our service would be so high.

Thanks Mitterand for speaking with me.

No, I say ‘thank you’ to you, because you are listening to me. Everyday, I am here for others, listening to them, and having to hold back my pain. But it’s nice that I can talk and you listen to me.

Speaking with Mitterand is always inspiring, and I know he is not the exception. From my experience in Uganda, I have witnessed the dedication of health workers throughout the country, ranging from district health officials to field doctors and nurses and community health workers. Further, I have seen administrators, Ministry of Health officials and policymakers who are also working tirelessly to improve the health of the population. I think it’s important for us in advocacy to re-frame the issue of health workers, by highlighting the positive aspects of their work and recognizing them for it, so that the media and general public can better understand them and the complexities of the Human Resources for Health issue. And we need health workers to also speak out and show their commitment and concern for the health of the population, because in the end, we are all working towards a collective goal to ensure the right to health for all.