Embarking on a trip through several Asian nations last week, Secretary of State Hillary Clinton publicly announced the United States’ support for the establishment of a United Nations Commission of Inquiry to investigate crimes in Burma. Unofficially announced months earlier, Clinton’s affirmation of support for an international investigation reflects the demands of Physicians for Human Rights and allied organizations which have been urging states to support an impartial inquiry into crimes in Burma. 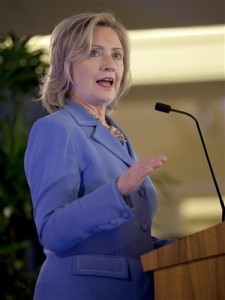 Clinton’s remarks were part of a speech that largely focused on Burma’s upcoming elections, the country’s first in twenty years. United States officials and others in the international community have recognized that the elections scheduled for November 7 will be neither free nor fair. Government officials and human rights organizations from around the world have clamored for the military regime to release the approximately 2100 political prisoners and allow opposition parties to fairly contest the election. The constant crackdowns on opposition voices and political critics, however, including the recent sentencing of a monk to 15 years of hard labor for anti-election campaigning, indicate that the election will be yet another display of the regime’s disregard for international norms.

The Burmese regime, called the State Peace and Development Council (SPDC), designed the elections to silence opposition and keep its members and allies in power. The SPDC’s Political Parties Registration Law excludes significant numbers of opposition leaders and demands allegiance to the flawed 2008 constitution from all prospective candidates. The Election Commission, hand-picked by the junta, can cancel elections in areas deemed insecure and answers to no independent body. The Commission has already indicated that it will cancel elections in parts of Kachin, Karenni, Karen, Mon, and Shan states, areas where minority ethnic groups have long opposed the military rulers.

The world should remember, however, that even if the elections were openly participatory and peaceful, significant problems would persist after the elections when the 2008 constitution is implemented. The constitution was crafted unilaterally by the regime to perpetuate military rule, ensure impunity for even the most serious of crimes, and continue abuses against political opponents and members of ethnic groups.

The constitution does not provide for true civilian rule in Burma but rather allows the military to retain ultimate control over all levels of government. The constitution affords the Commander-in-Chief of the military significant power over civilian leaders. There are no standards for approval, qualifications, or term limits for the Commander-in-Chief, as there are for other posts listed in the constitution. The Commander-in-Chief is also responsible for the Ministries of Home Affairs, Defense, and Border Affairs, and can appoint these ministers without any significant check from the President or other civilian leader. The constitution allows the Defense Services to enlist the entire population into its service in the name of national security without any check from a civilian body. This extreme control over the people of Burma is the cornerstone of a military dictatorship, not a genuine civilian government.

Other articles of the constitution demonstrate the regime’s effort to continue the militarization of politics that has taken hold over the past several decades. In an effort to perpetuate the systematic gender discrimination that has thus far marked the rule of the SPDC, the constitution limits key posts to men. The constitution refers to positions that are “suitable for men only”, indicating entrenched opposition to allowing women to fully participate in political life. By requiring the President and Vice-President to be well-acquainted with the military, which is made up of men only, the constitution effectively bars women from contesting the highest offices of civilian government. These parts of the constitution ensure that men, and most likely military-aligned men, will continue to control the civilian government after the election.

Perhaps the most jarring part of the constitution is article 445, which purports to grant a blanket amnesty to all military personnel for all crimes ever committed – even acts which may amount to crimes against humanity or war crimes under the Rome Statute. Although a culture of impunity currently protects criminals from accountability, the constitution will codify impunity and render victims of heinous crimes permanently unable to seek any measure of justice through the domestic legal system.

Physicians for Human Rights’ recent research shows evidence of the SPDC’s serious crimes which include killings, acts of sexual and gender based violence, the use of child soldiers, torture, and forced labor. When the constitution is enacted following the elections, the regime will continue its history of abuse. The election will not significantly change the current leadership of Burma but instead will allow criminals to get away with their crimes and enable the abuses of today to continue well into the future. Because the constitution excludes the Burmese legal system as an avenue to justice, the people of Burma and the international community must support other available methods of holding perpetrators of serious crimes accountable. Secretary Clinton’s addition to the chorus of voices calling for the United Nations to establish a Commission of Inquiry is a welcome first step to holding perpetrators of serious crimes accountable.

International attention is rightly focused on Burma leading up to the elections, but our demands for justice and accountability must not end on November 7. By moving forward with the creation of a commission of inquiry the international community can come closer to ensuring justice for the people of Burma.