I walk into Court Room 1 on Tuesday morning, January 31, at the International Criminal Tribunal for the Former Yugoslavia in The Hague.

Arriving on this long-imagined scene is surreal. There, just on the other side of the thick one-way glass, is Dr.William (Bill) Haglund, former director of our InternationalForensic Program, sitting at the witness table. He’s staring at the reddened face and shocking white head of hair of Radovan Karadžić, whose face I know from years of newspaper images and “wanted” posters. 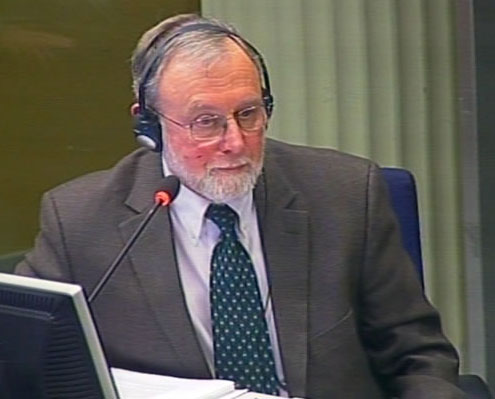 Dr. William Haglund, a forensic anthropologist, death investigator, and former director of PHR’s International Forensic Program, was the UN’s Senior Forensic Advisor for the Tribunal and conducted forensic investigations of mass graves in the former Yugoslavia.

A psychiatrist, Dr. Karadžić was indicted by theTribunal in 2009 for war crimes, crimes against humanity, and genocide against the Muslim population of Bosnia. He is finally on trial for these many crimes, including the massacre of thousands of men and boys separated from their families when his troops overran a UN safe haven at Srebrenica in 1995.

I practically burst into tears as I stare straight ahead at the row of judges in red robes who are presiding over thishistoric case. An agitated Dr. Karadžić fidgets and rubs his hands together,apparently formulating his next question as he takes up his own defense and cross-examination of Bill.

For years, the government refused to handover Dr. Karazdžić, and many of us feared this day would never come.

Even though I’m watching him, I find it hard to believe that Bill is finally able to present the validity and credibility of the excruciating months of work done by PHR teams in 1996 to exhume the mass graves in and around this enclave in Bosnia.

I’m recalling that at one point during the weeks of excavations led by Bill and conducted by an international team of PHR archaeologists, anthropologists and pathologists, Bill rolled out a sleeping back and slept at the edge of one of the graves. The UN ProtectionForces only had a mandate to guard live humans, not human remains, and sleeping next to the dead was the only way Bill could safeguard the integrity of the site and make sure no one tampered with the evidence.

Bill is deliberate and even professorial. At one point Karadžić asks Bill how he was able to come to the conclusion that the bodies in the graves were those of civilians rather than combatants. Bill responds that combatants don’t wear blindfolds.

Karadžić then asks if they might not have been blindfolds but rather Muslim warrior head- bands that slipped down and landed over the eyes of the buried bodies. Bill answers curtly that these were tied tightly and didn’t move up over the eyes or down below them.

As Karadžić continues in a haphazard way to grasp for holes in the evidence or testimony, I’m filled with pride and gratitude for Bill, the trial lawyers, and the many PHR scientists whose persistence and patience that have brought us to this day.

I’m hoping that the thousands of loved ones who lost fathers, husbands, brothers, and sons will see a measure of justice in this trial. In the end, justice may come slowly, but it will come.