This is the second of three posts by PHR's Burma Project Director, Bill Davis, on his recent trip to visit Burmese refugees in Delhi, India.

The Yamuna Clinic occupies the second floor of a faded building in a dusty Burmese neighborhood in west Delhi. A dark cement staircase opens onto a balcony and a waiting room where about a dozen Burmese refugees sit on wooden benches.

Dr. Tint Swe, the clinic’s founder and only doctor, is preparing for the day’s cases. He is still exhausted from an all-night baby delivery two days before. 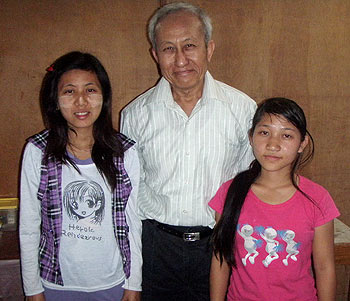 Dr. Tint Swe fled Burma in 1990, when the military regime took power and refused to acknowledge the results of the recent general election. He had been elected to the Burmese parliament as a member of the National League for Democracy (NLD), the opposition party led by Aung San Suu Kyi. Dr Tint Swe is still politically active as an exiled leader in the NLD.

The Yamuna clinic opened in 2004 to address the medical needs of refugees living in Delhi. It is funded by private donations and treats 50 to 100 patients per day. Common medical complaints are pregnancy, trauma, diarrhea, malaria, and respiratory infections.

The Yamuna clinic is serving an important need in the community. Burmese who have registered with the UNCHR can get free healthcare at hospitals run by the Indian government, but there are many barriers to accessing this healthcare. Refugees told PHR that a typical trip to the hospital entails taking off work (and missing a day’s pay), paying for transport to the hospital, and hoping to find a translator.

Refugees are often discriminated against—they are regularly bumped from the line to receive care by Indian nationals, and are frequently told to return to the hospital later in the week. The costs of transport and lost wages often make this impossible.

PHR applauds the Yamuna clinic and other who are struggling with limited resources to meet the needs of vulnerable people.