PHR is hoping that the 57th session of the United Nation's Commission on the Status of Women (CSW), an international forum that has dedicated this session to the elimination and prevention of all forms of violence against women and girls, will galvanize efforts around the world to achieve that goal.

Members of the International Campaign to Stop Rape and Gender Violence in Conflict, a coalition of organizations dedicated to eliminating the scourge of rape, are addressing United Nations delegations to promote comprehensive and effective solutions to violence.

As a key part of the International Campaign, PHR is building momentum to implement innovative approaches to promoting accountability for crimes of sexual violence. The PHR delegation is sharing information about its programs in the Democratic Republic of Congo and Kenya that build connections between the medical and legal communities to bolster local prosecutions of sexual violence.

Here is PHR's oral statement to the CSW:

On behalf of Physicians for Human Rights, an international organization that uses medicine and science to document mass atrocities and advocate for accountability, I am honored to present the following statement at the 57th session of the Commission on the Status of Women. For more than two decades, Physicians for Human Rights has investigated, reported on, and advocated to stop sexual violence and press for accountability in the conflicts in former Yugoslavia, Liberia, Sierra Leone, Sudan, Kenya, the Democratic Republic of Congo, and elsewhere. We have trained health professionals from many countries in forensic methods for documenting these crimes and supporting survivors.

Although justice and accountability efforts are critical, they should not obscure or replace the importance of comprehensive support for survivors and prevention of such atrocities in the first place. Widespread rape has profound consequences for the physical, psychological, and social well-being of survivors and also threatens the community, as these crimes rupture social cohesion and stability.

Mass rape in war occurs at the extreme end of a continuum of violence that is enabled by cultures of impunity and discrimination. Whether sexual violence exists in conflict or peacetime, accountability for these crimes is hampered by the stigma felt by victims, lack of access to medical care and psychosocial support, inadequate or non-existent forensic medical evaluations, and weak and fragile local police and judicial systems. These obstacles to accountability allow impunity to persist, signaling to perpetrators that the world will let them get away with their crimes. Survivors of sexual assault deserve much better from the international community and from their own governments. Members of the Commission on the Status of Women should prioritize strengthening local accountability mechanisms in order to properly address past crimes as well as to prevent future attacks.

Bolstering accountability for sexual and gender-based violence should not be the responsibility of any one sector or profession and should not be left to the legal community alone. We are convinced that eliminating sexual violence will only be successful through committed collaboration across the health, legal, law enforcement and judicial sectors. The decision to pursue prosecution is a decision for the survivor of violence; and for those who bravely come forward in this pursuit the system must be responsive to their needs. It is unconscionable for us to proclaim an end to impunity in the halls of the United Nations, while at the same time abandoning the victims of these mass crimes to unresponsive, unsafe, and under-resourced systems of justice.

Physicians for Human Rights’ pioneering programs are improving local access to justice for survivors of sexual violence in the Democratic Republic of Congo, Kenya, and elsewhere by bringing medical and legal professionals together to successfully prosecute offenders. In the past year, we’ve seen that training and collaboration has resulted in new medico-legal networks that are advancing best practices to properly collect forensic evidence of sexual violence. We’re inspired by the recent use of such evidence to obtain convictions.

But justice does not end with prosecutions. We now need to strengthen the delivery of the reparations that are often awarded by courts but rarely, if ever, delivered. Survivors need financial remedies, health care, psychosocial support, and skills training as well as social and economic reintegration. They need a chance for a hopeful future and a life with dignity. This more comprehensive understanding of justice will truly enable survivors of sexual violence to rebuild their lives, families, and communities. Physicians for Human Rights and our colleagues have documented a strong desire for justice from victims of sexual violence and their communities, and we have witnessed the healing power that legal accountability mechanisms provide for survivors.

In order deliver a meaningful response to survivors of sexual violence and to prevent future crimes, the international community must commit to a dramatically scaled-up global response. Our declarations about this crisis at the CSW must be matched by deeds: Political will at the highest levels and an investment of human and financial resources commensurate with the crisis. 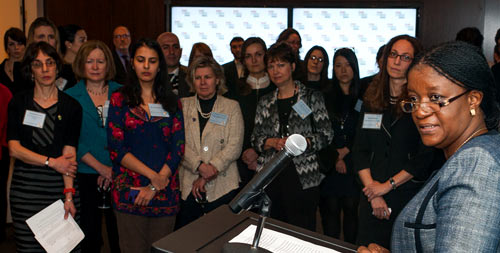 Zainab Hawa Bangura, Special Representative of the UN Secretary General on Violence Against Women in Conflict, addresses the gathering at a PHR-hosted reception on the occasion of the 57th session of the UN Commission on the Status of Women, March 7, 2013.