United Nations member states ended the 57th session of the Commission on the Status of Women (CSW) by adopting agreed conclusions that affirmed international dedication to ending all forms of violence against women.

The adoption of this statement from the CSW has been reported as a significant success by the international community. And in some respects, it is.

One week ago, opposition from governments including Russia, the Holy See, Iran, and Egypt was threatening the likelihood that agreed conclusions would even be adopted at the end of the session. These and other states were opposed to language that recognized women’s autonomy from their partners, reproductive and sexual rights, and same-sex relationships. They insisted on hiding behind the terms “religion,” “culture,” and “sovereignty” to shirk their moral and legal obligations to end violence against women within their own countries. Egypt’s government delegation went so far as to claim that the conclusions of the CSW would “lead to the complete disintegration of society,” sparking protests among women’s rights groups in Egypt and worldwide. Several governments reportedly objected to the word “gender” in any part of the document. Many refused to recognize that rape can occur in the context of marriage or other partner relationships.

Groups including PHR pushed back strongly against pressure from these pernicious actors to oppose elements of the concluding statement and even the rollback of pre-existing protections for women. PHR pressed for the direct reference to accountability mechanisms, including the International Criminal Court (ICC), and prepared a statement to the CSW that called for a multi-sectoral approach, drawing upon the health, legal, law enforcement, and judicial sectors to promote accountability for crimes of sexual violence. Thankfully, references to the ICC and other justice mechanisms are key parts of the final CSW agreed conclusions.

The adoption of the agreed conclusions prompts a sigh of relief rather than exuberance. The “no-brainer” consensus that violence against women demands a concerted and comprehensive response can hardly be considered a successful conclusion to the widely touted international forum dedicated to this urgent global crisis; agreement on these basics should have been the starting point of this year’s CSW. Instead, dismayingly, the debate over each element of the CSW conclusions has demonstrated that ending violence against women – an international imperative that should be a universal goal – is still controversial.

This means that our work is not over. PHR and our allies, including the International Campaign to Stop Rape and Gender Violence in Conflict, will continue to press for binding accountability mechanisms and strong political leadership as well as dramatically increased human and financial resources to more effectively combat the scourge of sexual violence. 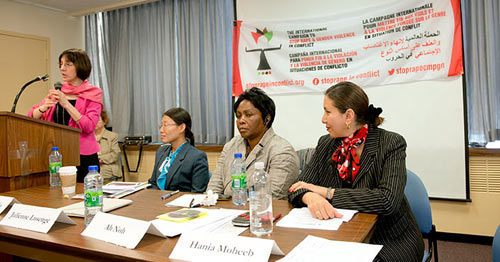