Reasonable people can disagree about how to fix our nation’s broken immigration system. But local, state, and even federal law enforcement agents who stake out migrant worker health clinics and arrest US citizens for helping undocumented immigrants access medical services call to mind dark eras in history when governments denied marginalized groups even the most basic human rights.

The right of all people to access health care, regardless of their immigration status, should be so fundamental that even isolated incidents of its denial result in a public outcry.

And yet the push to criminalize immigration status at the state level, coupled with the Obama administration’s heedless and destructive effort to deport millions of immigrants, has resulted in numerous instances of immigrants being targeted for deportation while trying to access medical care.

Perhaps more importantly, it has created a climate of fear in immigrant communities that makes  both legal and undocumented immigrants think twice before seeking emergency medical care for themselves or their children.

A recent article by Kaiser Health News and USA Today shines some light on the chilling effect of reckless state and federal efforts to crack down on undocumented immigrants. For example, it cites a recent report [pdf] by the Florida Association of Community Health Centers, in which 82% of surveyed migrant health providers described incidents of migrant workers in their area being arrested while trying to access medical services.

On the northern US border, a caseworker for Finger Lakes Migrant & Community Health in upstate New York was arrested while taking two migrant workers to a dentist. The workers were placed in immigration detention.

Among the hardest-hit areas is Alabama, where a draconian anti-immigrant law has that state’s large migrant worker population terrified of being on the roads, and health care workers frustrated that they can’t treat patients in need of medical care.

While health workers are increasingly traveling to farms to provide their services so as not to risk arrest and deportation for undocumented immigrants, the effect of state laws and federal enforcement policies on the approximately 1.5 million undocumented immigrants who produce our nation’s food supply will undoubtedly be devastating.

There is no excuse for any law or any policy that would jeopardize someone’s health because of his or her immigration status. Federal, state, and local law enforcement agencies must recognize that the universal right to medical care does not depend on a sick person’s ability to show their papers. 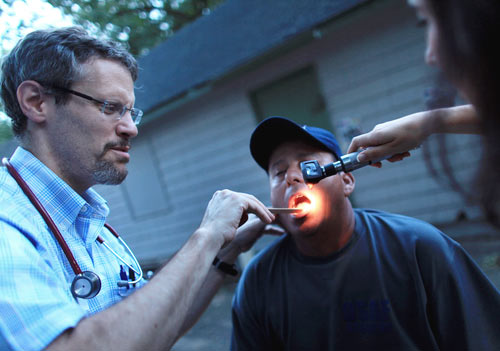 The University of Connecticut Migrant Farm Worker Clinics visit area farms and nurseries from June to October offering health screenings and preventive health education for migrant farm workers and their families, who otherwise lack access to health care due, in part, to fears of deportation. Photo: Spencer Platt/Getty Images.